One of the main result data sets of cosmological simulations are (dark matter) halo catalogues, which are then used for further analysis. They contain dark matter halos (or groups of dark matter particles) and their intrinsic properties, like position, velocity, mass and radius. Different techniques for finding and defining such halos exist, and we therefore briefly describe the halo finders used for the data in the CosmoSim database. An overview can also be found at e.g. Knebe et al. 2013 (appendix).

AHF employs a recursively refined grid to locate local overdensities in the density field. The identified density peaks are then treated as centres of prospective haloes. The resulting grid hierarchy is further utilized to generate a halo tree readily containing the information which halo is a (prospective) host and subhalo, respectively. Its halo-finding algorithm is fully recursive, automatically identifying halos, subhalos, sub-subhalos, etc. Halo properties are calculated based on the list of particles asserted to be gravitationally bound to the respective density peak. To generate this list of particles, an iterative procedure is employed starting from an initial guess of particles. This initial guess is based again upon the adaptive grid hierarchy: for field halos, we start with considering all particles out to the isodensity contour encompassing the overdensity defined by the virial criterion based upon the spherical top-hat collapse model; for subhalos we gather particles up to the grid level shared with another prospective (sub)halo in the halo tree which corresponds to the upturn point of the density profile due to the embedding within a (background) host. This tentative particle list is then used in an iterative procedure to remove unbound particles, not changing the halo centre though. In each step of the iteration, all particles with a velocity exceeding the local escape velocity, as given by the potential based on the particle list at the start of the iteration, are removed. The process is repeated until no particles are removed anymore. At the end of this procedure, we are left with bona fide halos defined by their bound particles and we can calculate their integral and profiled quantities.

The only parameter to be tuned is the refinement criterion used to generate the grid hierarchy (usually set to three to four particles per cell) that serves as the basis for the halo tree and also sets the accuracy with which the centres are being determined. The virial overdensity criterion applied to find the (field) halo edges is determined from the cosmological model of the data though it can readily be tailored to specific needs. For more details on the mode of operation and actual functionality, we refer the reader to the two code description papers by Gill et al. (2004a) and Knollmann & Knebe (2009), respectively.

The radius of AHF halos was defined via

BDM stands for “Bound Density Maximum”, its basic technique is described in Klypin & Holtzman 1997: Particle-Mesh code for cosmological simulations. In principle, the algorithm detects local density maxima, determines a spherical cut-off for the halo and removes unbound particles from the halo, i.e. those particles with a speed that exceeds the escape velocity. The BDM code used for producing the data for these databases was improved a lot since 1997. For details, please contact the author (Anatoly Klypin) directly. A description of the updated version is also available in Riebe et al. 2013. The latest version even allows to detect if a halo is a subhalo (i.e. its center lies within the virial radius of a larger halo) or a distinct halo. Please note, that distinct halos may still overlap and subhalos are not necessarily lying completely within their host (only their centre, see illustration below).

This information is included in the BDM tables as well. 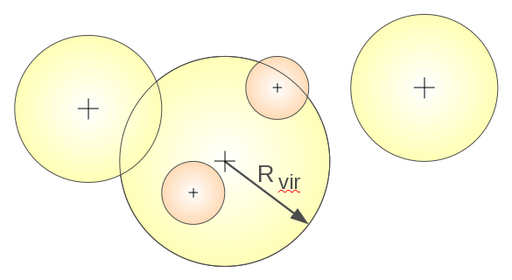 Figure 1: Distinct BDM halos (yellow) and subhalos (orange): The centers of distinct halos do not lie within the virial radius (Rvir) of a larger halo, in contrast to subhalos. This still allows that halos and subhalos overlap.

This means that halos of the BDMW catalogue are smaller than the corresponding halos in the BDMV catalogue.

The BDM catalogues also contain the axis ratios and the direction of the major axis of the halo’s triaxial shape. This information is obtained from diagonalization of the modified
tensor of inertia Tjk for all particles inside halo radius:

where j,k = {1;2;3}, i is the particle index, x stands for the position and r for the distance with respect to the halo’s center (see also e.g. Allgood et al. 2006, equation (5)).
A correction factor for the axial ratios was applied to compensate for the fact that Tjk is estimated using a spherical region.

The FOF or “Friends-of-Friends” catalogues were produced by Stefan Gottlöber. Its method dates back to Davis et al. 1985, but several adaptations have been done since then. The version used here is described in Halos gone MAD: The Halo Finder Comparison Project by Knebe et al. 2011.

In principle, particles are “linked” together if their distance lies below a certain threshold, called “linking length”. This means that the distances of particles at the boundary of such a linked object (a “FOF group”) are smaller or equal than the linking length, corresponding to a density threshold. In our database, we have listed FOF groups of several linking lengths (indicated by the “level” column), so that also substructures are included. No binding/unbinding procedure has been applied, i.e. a FOF substructure is not necessarily a “subhalo”. However, we still call “FOF groups” also “FOF halos”.

The linking lengths and levels are stored in the table e.g. Bolshoi linklength for each database with a `FOF-table.

By definition, FOF groups cannot intersect, which means that a particle can be assigned uniquely to just one FOF group (for a given linking length). This is very useful for establishing the link between FOF groups and their particles, as provided in the FOFParticles tables. Further, substructures always lie completely within their host, since they are defined by smaller linking lengths (see illustrations below). 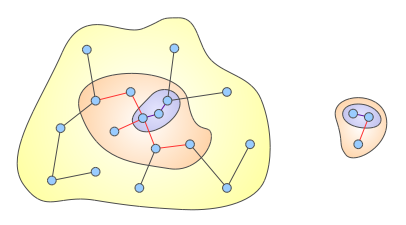 Figure 2: FOF groups with different linking lengths (yellow, orange, violet): substructures are defined as FOF groups which have a smaller linking length and lie inside a larger host halo. By definition, they always lie completely within their host.

Figure 3: FOF groups cannot intersect: if two objects come close enough (distance smaller than the linking length), they “combine” (via a “FOF bridge”) and are hence treated as one object.

ROCKSTAR (Robust Overdensity Calculation using K-Space Topologically Adaptive Refinement) identifies dark matter halos, substructure, and tidal features. The approach is based on adaptive hierarchical refinement of friends-of-friends groups in six phase-space dimensions and one time dimension, which allows for robust (grid-independent, shape-independent, and noise-resilient) tracking of substructure. The method is described in detail in Behroozi, Wechsler and Wu, 2013.
Also see Bitbucket – Rockstar for the code repository at Bitbucket.